Their bags sat ready at the door. Again. Taden looked around at the room that had sheltered them for the past few months; then he and his family of five began their trip back to their house in a distant village. Where was their home? It was here; it was there; it was wherever he could find a job. 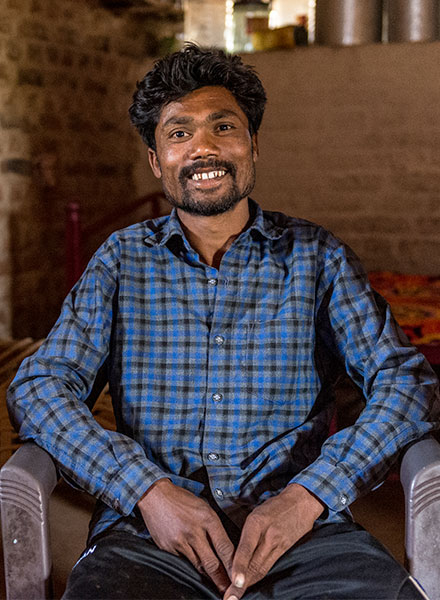 Although Taden now has much to smile about, his situation was dire just a few years ago. He used to feel grieved at the plight of his family, especially when he observed his children growing up in the same poverty he experienced as a boy.

Taden and his family survived by working seasonal manual labor jobs. He, his wife, their two children and his mother often traveled from their home village in Maharashtra, India to labor in distant fields. His family spent intense hours harvesting sugarcane just to earn a tiny wage. Even if Taden could afford to send his children to school, which he couldn’t, their frequent moves made enrollment impractical and gave none of the stability his children would need to do well in school.

Finished with the job they had found, Taden led his family back to their home-base village frustrated and disappointed at his inability to meet the needs of those he loved so much.

The Dream of a Hungry Boy

Taden had always been poor. His father died just three years after Taden’s birth, which thrust the family into financial depression. His mother, Jamini, worked wherever she found jobs and did everything she could to meet the needs of her children. But as a widow in a less-than-hospitable environment toward single mothers, she could offer them very little.

As he grew and understood their situation more, Taden dreamed of a day when he wouldn’t be hungry, when he would have enough clothes, when he would be a father and give his children a life outside of poverty.

That ambition clung to Taden—but so did poverty. Years passed, and although Taden became a loving husband and father to four children, he couldn’t meet his family’s needs. As his children grew, they experienced the same poverty he had as a child. He poured himself into work, but he couldn’t get ahead. Eventually, his children joined the ranks of the 150 million child laborers in the world and worked alongside their parents. They migrated for work four to six months out of the year. Continually uprooting his family and watching his children grow up uneducated was not the life Taden wanted for his family, but it was all he could provide.

“I always used to think about my children, about what will happen to their future when my life is not yet settled,” Taden recalls. “I couldn’t afford a very nice life for my family, and I used to feel very angry at myself at times, very sad with myself because of the situation I was in.”

“I always used to think about my children, about what will happen to their future when my life is not yet settled.”
—Taden

In the midst of Taden’s discouragement, GFA-supported pastor Naimish struck up a conversation with him. During Taden’s childhood, he had observed some believers in Christ. He saw their love, unity and honesty, and he longed to be part of their fellowship. Now as Taden talked with Pastor Naimish, God stirred the struggling father’s heart in a mighty way.

“The first time I met Pastor Naimish, … I felt as if God had come in to meet me,” Taden shares. “He became a mentor for me from that day. … He counseled me from God’s Word, and from the teaching and the counseling that I got, I was really satisfied that I can find a new way.”

Taden did find a new way, and it led to life everlasting and joy abundant. Now he had hope in Jesus, who said in Matthew 7:11, “If you then, being evil, know how to give good gifts to your children, how much more will your Father who is in heaven give good things to those who ask Him!” Soon, that promise materialized for Taden. 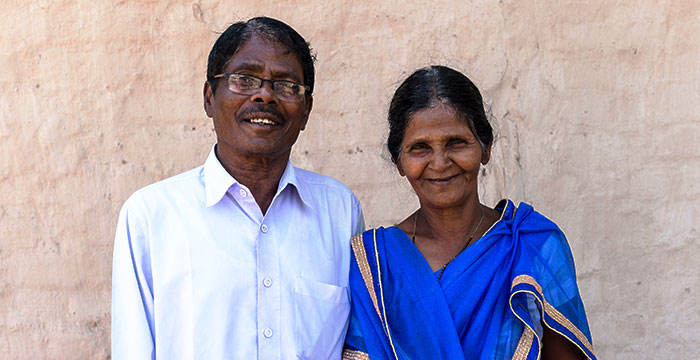 Pastor Naimish (pictured with his wife) brought news of great joy to Taden. During the time he spent discipling Taden, Pastor Naimish also saw how much Taden’s family needed a financial breakthrough—and he came up with an idea.

A Gift from Above

One day, Pastor Naimish walked up to Taden and told him some amazing news: Taden would receive a cow as a free gift, simply because God loved him and saw his need.

“When Pastor Naimish told us that we can get a gift of a cow, we were really overjoyed,” Taden recalls, “because we did not have anything in our house to call our own. But we felt that if we get the cow, we can really improve our lives.”

Their new gift-from-God cow soon gave birth to a calf and started producing milk. By milking the mother cow twice a day and selling the milk, Taden earned enough money to comfortably meet his family’s basic needs and finally start giving them the life he longed for them to have.

The milk money meant they no longer needed to find labor work in distant areas, which meant they could finally settle down together as a family—and afford school fees. Taden happily watched his children go to school instead of to work. His cow was enabling his children to jump from the path of illiteracy and perpetual poverty to the path of opportunity and education. And that was only the beginning.

Eager to best utilize his gift, Taden considered what to do now that he had two cows. The income from selling milk helped the family, but caring for multiple cows became challenging for his family. He decided that selling one cow would help his family’s situation and also provide greater capital for developing his livelihood.

“I had observed others who were raising goats,” Taden explains, “and I came to know that the goats, they bear kids once every five months. … [If I sell the mother cow and] buy some goats, they will be another additional source of income for me.”

When the calf was old enough to leave its mother, Taden sold his original cow and bought a pair of goats. Within a few months, his goats multiplied and gave him two goat kids. He sold those kids and earned in that one sale what it previously took his entire family six months of hard labor to earn! As helpful as the milk money had been for the family’s basic needs, gaining such a large sum a few times a year boosted their financial situation yet again and enabled them to purchase new clothes, school books and other supplies.

Taden thanks God for those who enabled him to give a better life to his family.

“I would like to thank those who have helped me get the cow as a gift. My life has definitely been blessed 100 percent.”
—Taden

“I would like to thank those who have helped me get the cow as a gift. My life has definitely been blessed 100 percent,” Taden says.

Taden currently has his growing calf and five goats, the two parents and three new kids. He plans to sell the male kids and keep the females to increase his herd.

Taden’s situation has improved drastically because of the gift of a cow, but generational poverty is not eradicated in one day. Taden continues to diligently care for his family and plan for their future. Even though they are still recovering from their poverty, his business plans don’t just focus on his own family.

“I am really willing to give one of my goats to a needy or a poorer person,” he says. “I am just waiting for the goats to grow up, and then definitely I will do what I have decided in my heart.”

Taden knows firsthand how needy his neighbors are and how significant income-generating animals are in his own life, and he is willing to share from the little he has to help others experience the blessings he received.

In 2018, partners like you helped provide gifts for 241,732 poor families, enabling them to earn an income or raise their quality of life. Many of those families received animals, such as cows, goats, chickens and pigs, and are continually reaping benefits from those gifts. We rejoice in God for the thousands of families who are making their way out of dire poverty! Yet thousands more remain trapped in destitution. Our work is not yet done.

You can stand alongside Taden and help families like his escape poverty by providing income-generating animals. Every family who is helped can become an agent for more change! Demonstrate Christ’s love today by giving good gifts to those in need.

Give Gifts from the Stable