Chasing Education for Her Sister's Future

Sumana helped her parents pack up for the move to the city and corralled her siblings as their departure grew closer. As one of the older sisters, Sumana shouldered a lot of responsibility. Her family was poor, and it took many hands to keep the family fed. Though still a child herself, Sumana did more caretaking than being taken care of. Sumana was still a school-aged girl when she had to start worrying about providing for her family and six little siblings.

It was a necessary move. Sumana’s ancestors had lived here for thousands of years, tending livestock and farming the land. They had a unique culture, language and traditions that made them stand out. They also had the ignoble legacy as one of the most discriminated against people groups in their country; much of their land had been confiscated and redistributed to others. Sumana’s people clung to their identity but wanted to prosper in the world evolving around them. With only 30 percent of the population literate, education was the key to unlocking a future for her people.

Sumana’s family had struggled for years to make life work in their village. But with seven kids, the family couldn’t afford to keep all their children out of the fields and in school. So they moved to the capital city in search of better wages, a better lifestyle and better futures for their children.

Once in the city, relatives connected Sumana’s parents with jobs at a carpet factory. They learned to wash, dye and weave wool into intricate patterns by hand on giant upright looms. Sumana’s parents worked long hours to maximize their wages, dividing each paycheck to cover rent, food, household expenses, school costs and transportation—but it just wasn’t enough. They had escaped the poverty of the countryside only to be caught in the poverty of the city.

To help her family, Sumana quit school and went to work with her parents. Maybe three incomes and one less tuition would swing the family’s finances into the black. Sumana and her family moved to the capital city of their country looking for new opportunities; instead, they encountered the same adversary: poverty.

Sumana didn’t want to work. She wanted to stay in school, to learn to read, to learn math. But she clung to the thought that if she went to work, at least her younger siblings could finish school.

So Sumana went to the factory, flanked by her parents. She sat before the wall of vertical threads and knotted colourful wool along each strand, her hands moving swiftly in a delicate dance as her fingertips grew red and raw. It would be months before calluses thickened her young skin.

Parents in this region commonly find themselves in desperate situations and make the same decision as Sumana’s parents to put their children to work in carpet factories.

“We found a number of adolescent workers at the quarries, and children as young as six years old working at looms in their village,” shares a journalist from The Caravan, which published an investigative article on child labour. “They told us that they were working to help support their families and would rather attend school regularly. Their parents told us they would like their children not to work, but could not afford to go without the additional income their children brought in.” 1

“We found a number of adolescent workers at the quarries, and children as young as six years old working at looms in their village,”

Minimum wage for daily labourers at the factories was $1.60 per day, below the universal extreme poverty line. It’s possible they made even less, as the carpet industry has a history of exploiting poor villagers desperate for work by paying them in advance and then requiring long hours to “pay off” their “debt.” This debt often balloons with fines and rent if the factory also supplies housing, essentially reducing labourers to indentured servants.

“These families are so poor and often in so much debt that they are not likely to recover from either,” says a GFA report on child labour. “So they sacrifice the future (the education and success of their children) on the altar of the immediate (survival now).”2

Sumana’s family’s search for a better life in the city proved futile. Her parents discussed their options and decided to return to their village. But not everyone. Many factory labourers find it difficult to keep their children in school because of the low wages they earn and the pressure to have their children join them at work. Parents, like the ones of the girl pictured here, know education is the way out for their children and find the help they need through Bridge of Hope.

Sumana’s parents left her and her younger sister, Sai, in the city. Sai was to join Sumana in the carpet factory and send their income back home to help support the family. The girls felt abandoned and isolated. Sumana watched all her dreams for her siblings’ future wash away.

Burdened with supporting her family and parenting her younger sister, Sumana couldn’t give up hope for her sister. She would not allow her to live life illiterate and uneducated.

Sumana went to the local school and enrolled Sai in classes. With a list of school supplies and tuition fees, Sumana realized how many hours she would need to work to keep her sister in school. She was determined to do it. Sumana knew the importance of education, a knowledge backed up by statistics.

In regions all throughout Asia, the trends are shockingly similar. In one country near Sumana’s family, a literate person earns 23 percent more than an illiterate person, shares a GFA report on the relationship between education and poverty. “And in the female workforce, a woman with high literacy skills can earn 95 percent more than an illiterate woman or one who has low literacy skills.” 3

“And in the female workforce, a woman with high literacy skills can earn 95 percent more than an illiterate woman or one who has low literacy skills.”

The sisters made a home together as best they could, parting in the mornings, one to school and the other to work. Sai got home long before her sister. Homework spread before her, confusion and questions preventing its completion. Even if Sumana got home early enough to help Sai, being uneducated herself, how could she?

Sumana noticed Sai’s grades fall, but she could not afford to hire a tutor. She was doing all she could just to keep her in school.

A knot of worry grew in Sumana’s belly, and she began to lose hope. No matter what she did, Sumana could not save her sister from a future of poverty and hardship. Maybe they were destined to be poor. Maybe this is how the world worked for people like them. Maybe there was no way out. 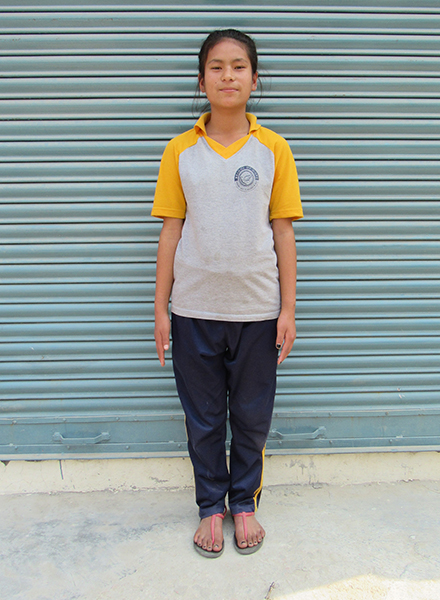 After Sai enrolled in Bridge of Hope, her grades improved, and she was no longer at risk of joining Sumana in the carpet factory.

The Door to Education Opens

Sumana told a coworker about her sister’s struggling grades and her frustration at the obstacles that always seemed in her way. The coworker had children and had the same struggles until her kids joined a GFA Bridge of Hope centre.

GFA’s Bridge of Hope Program began in response to people trapped in generational poverty and cycles of illiteracy. K.P. Yohannan, founder of GFA World, and leaders on the field knew education would be key in helping people out of this destructive cycle, and the Lord revealed to them a way to help families and communities. Because many parents needed their kids to work to put food on the table, providing a daily meal and basic household necessities through an after-school childcare project would relieve some of the burden these families carried.

Interest piqued, Sumana asked to hear more about Bridge of Hope and learned that the children went to the centre every day after school to be tutored according to their grade level. They also got individual instruction and help with their daily homework. After studying, the children had a meal together and sang songs and played games. They even entered local contests and participated in competitions.

Going to the Bridge of Hope centre, Sumana introduced herself to the staff. She told them about her younger sister and how her parents thought they were both working in a carpet factory, but Sumana was trying to keep her sister in school instead. The staff agreed to enroll Sai in Bridge of Hope and provided Sumana with the school supplies her sister needed. They also committed to paying Sai’s school tuition.

Every day after school, Sai raced to the Bridge of Hope centre, eager to see her new friends. She received help with her homework and grew to love the adults who took care to invest in her life. When she came home, she had so much to tell her sister. Sumana was grateful to the Bridge of Hope staff for investing in her sister and helping her to thrive in school.

The Bridge of Hope centre Sai attended was not unaware of the difficulties many in their community faced—Sai was not the only child Bridge of Hope was keeping out of the carpet factories. Sumana’s heart and determination to see her younger siblings have opportunities she was denied mirror the commitment of Bridge of Hope to lift up impoverished and vulnerable children all across Asia.

Bridge of Hope became the community support Sumana needed to help her family. The staff was there every day for Sai, helping her grow and develop. When winter came, Bridge of Hope gave Sai and her classmates a winter coat. They also gave the children hygiene items to help with household expenses. With this help, Sumana started sending more money home to support the rest of her family.

Sumana sees a future wide open with possibilities. With her sister now at the top of her class, Sumana is confident that poverty has moved out of the picture for her and—through her sister—her family. With a higher education leading to a good paying job, her family’s future is secure. Sumana rejoiced in the realization of her hopes. Her determination in the face of many obstacles and sacrifices for the sake of her sister has opened the door to a new world. Bridge of Hope child sponsorship is the path out of poverty for more than 70,000 children.

You can help families like Sumana’s who desperately want to see their children escape poverty and hardship. No one stuck in poverty through lack of education wants to stay there. But the cost of education can make it impossible. Many of these families cannot do it on their own. Bridge of Hope provides these hard-working families the help they need to clear the hurdles previous generations could not. By giving to Bridge of Hope, you can set child labourers, like Sai, free from factories. You can empower children to achieve a better life for them and their families. You can give hope.