The tarp walls of Divena’s home could not contain the sound of her mom and dad’s constant arguments. When her mother suddenly left to be with another man, the house fell silent. Three-year-old Divena and her older brother never saw their mother again. 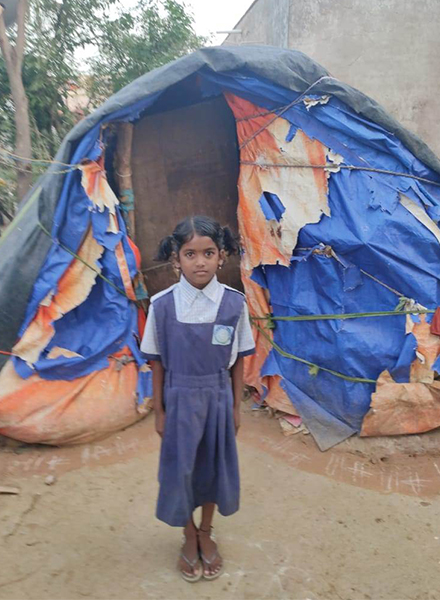 Divena (pictured) and her brother lived alone in this tent while their father spent weeks at a time on the road as a truck driver.

Divena’s father, a truck driver, left the children home alone for weeks at a time because of his job. Divena’s elderly grandmother intervened when she saw her and her brother starving during these long stretches on their own. She eked out a meagre livelihood for the three of them, but two years later, her age and health rendered her incapable of caring for her grandchildren—and they were left alone once more in their father’s hut, only seeing their father between driving jobs.

Each morning, while other kids walked to school with their backpacks bouncing behind them, Divena, now 5, was stuck inside her home’s flapping blue walls, unable to join them. Instead, the little girl spent her days playing in the mud, perhaps creating a world where a girl had her mommy and a kitchen filled with food, a world she wished she knew.

Yashimita’s heart filled with pity at the sight of the little girl caked with mud who had no one to take care of her.

One day, Yashimita, a Bridge of Hope social worker visiting her students in the area, passed by Divena while she was playing. Yashimita’s heart filled with pity at the sight of the little girl caked with mud who had no one to take care of her. Asking about the little girl, Yashimita heard the sad story of Divena and her brother. Pity turned into compassion within Yashimita’s heart, and she knew the GFA-supported Bridge of Hope centre where she worked could help them. Divena and her brother, who used to spend days without food while their father was gone, now eat a healthy meal every day at the Bridge of Hope centre, where they also get guidance and love from the staff.

With Yashimita’s help, Divena and her brother enrolled in Bridge of Hope. Divena felt like she had entered a new world—not an imaginary one, but a real one where children were happy and adults showed up every day and loved children. Real peace inhabited the centre, unlike the stillness of her house, which was just the absence of strife. The environment at the Bridge of Hope centre was active and filled with people, laughter and adventure. Playing with her friends is a highlight of Divena’s day. Here, she is about to compete in a race with other children at the Bridge of Hope centre—a stark difference to when she played in the dirt by herself.

Divena’s father and grandmother rejoiced that the children were enrolled at the Bridge of Hope centre. The children were guaranteed a meal every day, adult supervision and guidance. Divena and her brother also received school supplies and free tuition, which enabled the siblings to enroll in school.

The highlight of every day for Divena was playing at the centre with friends. They sang songs, competed in races, took field trips and performed cultural dances together.

Divena made use of the opportunities Bridge of Hope gave her and now dreams of a bright future for herself. Each morning, Divena pulls on her own backpack, joins the passing children on their way to school and leaves the tarp walls behind.

“. . .Whenever I saw the children going to school with their bags, I felt very sad. However, today, Bridge of Hope has become a blessing to me and my brother.”
—Divena Bridge of Hope has opened the door for Divena and her brother to attend school, supplying the siblings with notebooks, pencils and tutoring, enabling the children to have dreams for their future.

“I was totally discouraged when my mother left us alone,” Divena shares. “It was very difficult for me and my brother to live without her. We starved many days, and our father also could not look after us. Whenever I saw the children going to school with their bags, I felt very sad. However, today, Bridge of Hope has become a blessing to me and my brother.”