It’s Monday morning at GFA’s U.S. headquarters in Wills Point, Texas, and dozens of men and women—behind-the-scenes missionaries—make their way to their desks after spending time together in prayer. Some are bursting with energy, while others are blearily drinking their coffee. Whether their day will be spent answering phones, fixing computers or printing missionary profiles, they each know the importance of their work: They are bringing the knowledge of Jesus to communities in Asia.

GFA’s Mission Support Team is like the narrow funnel in the center of an hourglass. From the top of the glass flows help from the Church worldwide—the result of people partnering to touch lives for Christ; at the bottom of the glass is the field—the millions in Asia who desperately need a relationship with Christ. Behind-the-scenes missionaries in GFA’s Mission Support Team are at the center, a vital link in connecting on-the-ground workers with the prayer and finances critical to ministry. 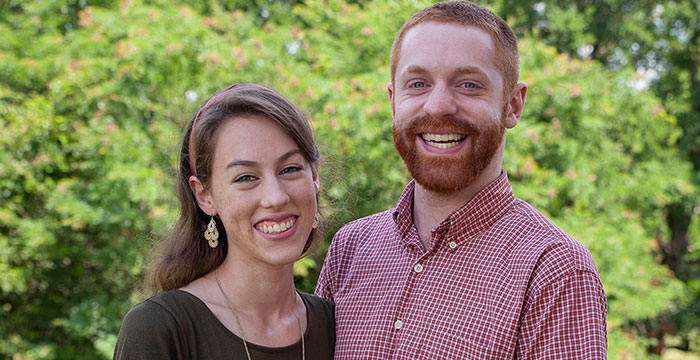 Jenny and her husband, Nathan, both serve as behind-the-scenes missionaries at GFA. Through their work in graphic design and IT, they help touch thousands of lives.

Bridging the gap between the thousands of national workers and the thousands of supporters around the world isn’t an easy job—but these men and women didn’t join GFA’s Mission Support Team because it would be easy. They joined because they understood the vital role behind-the-scenes missionaries play in bringing Christ’s redemptive love to people in Asia, and they knew God wanted them to spend their days doing just that.

Jenny, a behind-the-scenes missionary who serves as a graphic designer, watched her parents serve at GFA throughout her childhood. After graduating high school and praying about her future, she decided to join the Mission Support Team, too.

“I knew the investment produces so much fruit. There are a few of us in this office, but it empowers so many people [on the field],” she says.

“There are a few of us in this office, but it empowers so many people [on the field].” —Jenny

Because of her work designing brochures, newsletters and hundreds of other projects throughout her seven years of service, thousands of GFA partners have learned about needs on the field and jumped into action to help meet those needs. At the same time, Jenny, like every behind-the-scenes missionary, represents more than 100 national missionaries who minister on the field and more than 500 children who are being helped through GFA’s Bridge of Hope Program.

Realizing the impact her everyday life is having on so many lives, Jenny shares, “That’s more than I would dare to ask for or more than I deserve for what I do.” 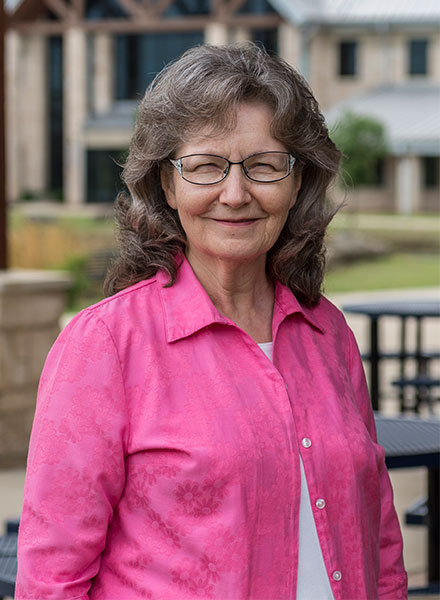 After years of serving God in many ways, Carolyn still wanted to use her life to touch others. Through her efforts at GFA, she is helping bring hope to the children of Asia she cares so much about.

When another behind-the-scenes missionary, Carolyn, moved away from her relatives, church and job of 24 years to help in GFA’s Texas office, it was the plight of Asia’s children that most gripped her heart.

“Children had always been on my heart,” she says. “I thought I could make a difference a little bit if I come here to help.”

And she does make a difference. Carolyn helps process donations that will go on to impact countless children in Asia. And when someone signs up to sponsor a national missionary or Bridge of Hope child, Carolyn matches them with a missionary or child in need of a sponsor.

The full impact of a sponsor’s prayers and financial support is known only by God, but we catch glimpses of it through incredible reports from the field. Carolyn knows those stories, and she knows her daily life is bringing hope to children like those she reads about.

“I’m making an eternal difference in many lives that would otherwise not even know the love of Jesus.”
—Carolyn

“I make a difference every day that I come in, even though it’s just typing numbers,” Carolyn says. “I’m making an eternal difference in many lives that would otherwise not even know the love of Jesus. … I’m doing it for those kids and the field.”

The People Behind the Vital Link

Behind-the-scenes missionaries don’t stand front and center; they don’t regularly travel to Asia or hear the voices of those they spend their days helping. Yet their lives are intertwined with hundreds of thousands of people in Asia who are hearing about Christ, many for the first time. Without the faithful work of the Mission Support Team, national missionaries and Bridge of Hope children wouldn’t be partnered with sponsors; Jesus Wells and church buildings couldn’t be constructed; and many other facets of ministry would experience lack. And even this vital link has a critical need: people like you who will partner with behind-the-scenes missionaries.

GFA’s Mission Support Team members raise their own support to counteract personnel-related costs to the ministry—but that is a difficult task. It takes time and effort away from the other work God has put before them, and it can weigh on the minds of those who don’t have the support they need.

You can partner with a behind-the-scenes missionary or family and provide for them through your prayers and financial support. They live simply, striving for a balance of caring for themselves and their families while also living sacrificially for the sake of those in Asia. By linking your life with someone on the Mission Support Team, you will share in their fruitfulness in God’s kingdom and allow many more people to hear of Christ’s sacrifice. You will also get to hear personal updates and field updates from those you partner with. The Mission Support Team plays an essential role in providing the field with needed resources, but these behind-the-scenes missionaries need people like you to stand behind them and enable them to do their role.

Join with a behind-the-scenes missionary today, and make an extraordinary impact together for God’s kingdom!