Unlocking the Door of Literacy

Jeni studied the curling lines and shapes on her grandson's homework paper. With a sigh, she handed it back, knowing a great treasure lay within those squiggles and loops, but she lacked the key to unlock it. 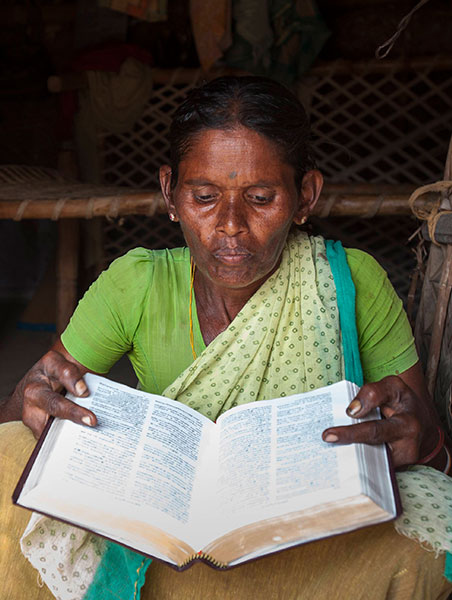 This woman, like Jeni, also never learned to read. She hungered for God's Word but could only stare at the pages of her Bible, unable to read them.

Years earlier, poverty had hindered Jeni from attending school, leaving her illiterate in a world filled with written information. While many children took education for granted, Jeni longed for the opportunity to attend school.

Jeni's lack of education impacted her childhood and adult life in a multitude of ways. Illiteracy deprived her of the joy of reading stories—both to herself and, later, to her five children. Unable to read newspapers, the current events of her nation had to reach her by word of mouth. Street signs were useless when finding her way around a new area. No reminder notes or shopping lists could be written. What's more, Jeni could have looked straight at the written name of Jesus and never have known it.

Although Jeni was blessed with good health, her husband succumbed to an illness when Jeni was only in her 20s. As the sole provider for her children, she worked hard to learn tailoring and managed to earn an income through her stitching work. But without literacy and basic math skills, Jeni and other women like her were often cheated by dishonest shopkeepers, making already tight budgets even tighter.

As years passed, Jeni's children married, and she became a grandmother. Even then, her illiteracy troubled her.

“Sometimes my grandson and granddaughter asked me to help with their school homework, but I did not know what to do.”
—Jeni

Jeni felt ashamed of her inability to read or to sign her own name, and she had no idea the gift of literacy—and eternal hope—was just around the corner at a local church.

In addition to her problems caused by illiteracy, Jeni suffered from pain in her shoulders. Even after several doctor visits and treatments, she found no remedy for the pain—until she met a believer from a local church. Jeni accepted the believer's invitation to attend a worship service and soon sat amidst a congregation of believers led by GFA World-supported pastor Ajay. 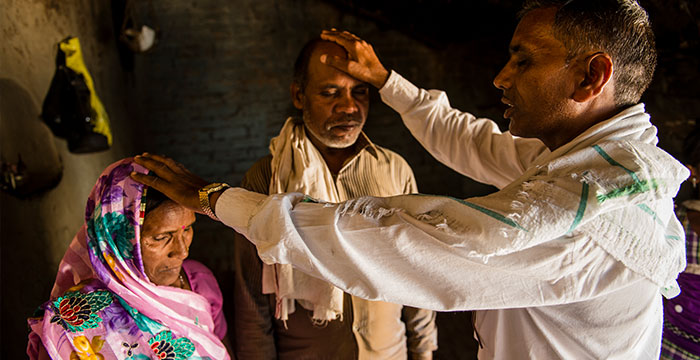 Just as Jeni received prayer, both believers and unbelievers can receive prayer at local churches in Asia.

When Jeni shared about her painful shoulders, Pastor Ajay and the believers joined together to lift her up in prayer to the Great Physician. Faithful and mighty, God touched Jeni and set her free from the pain she was enduring. Jeni grew to love the Lord with all her heart and began faithfully worshipping Him alongside her new family in Christ, rejoicing in God's demonstration of mercy and compassion.

Now a fledgling believer in Christ, Jeni was again hindered by illiteracy. She had no way to read her Savior's words or read the stories of God's faithfulness toward His children in the Bible.

When three GFA World-supported women missionaries serving the congregation learned of Jeni's difficulty, they encouraged her to join the literacy classes they taught for women in the community. Naturally a shy person, Jeni attended the first lesson timidly

"Don't lose heart," one of the sisters encouraged her. "Believe in God and do your best." 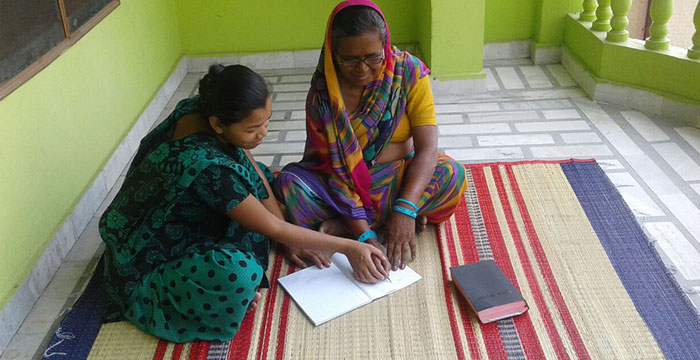 GFA World-supported women missionaries gently guided Jeni (right) as they taught her to read and write.

After the first lesson, however, Jeni's excitement overcame her shyness, and she eagerly joined the other women learning to read. The skill she had longed to learn for so long was finally within reach!

"I am so thankful to God and our women missionaries for their help," Jeni shared. "Though I had the desire [to learn], I never went to school."

Jeni persevered in her lessons and diligently learned from the women missionaries. They guided her hand as she learned her letters, and soon the strange loops and lines she had seen on her grandson's paper began to hold meaning.

Other women in Jeni's community observed her progress in her studies, and Jeni encouraged them to join the classes as well. Soon, a few more ladies joined the classes to decipher the same letters that had baffled Jeni for so many years. 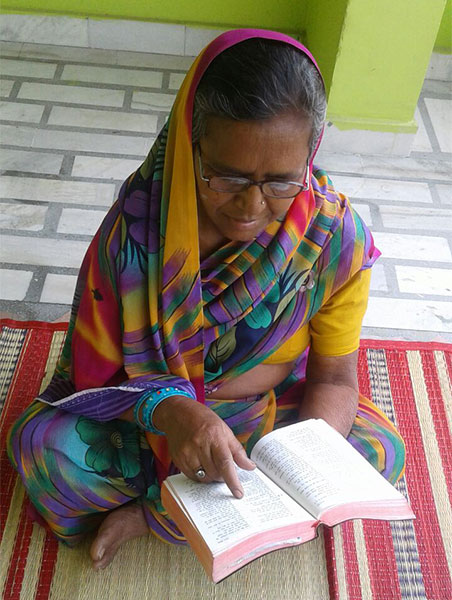 No longer held back by illiteracy, Jeni (pictured) now reads her Bible for herself and can grow in her knowledge of God's Word.

As these women worked through a GFA World-supported literacy curriculum used to educate thousands of other women across Asia, they soon found reason to rejoice. Utilizing Scripture as a foundation for teaching, the curriculum not only helps women enter the world of literacy, but it also helps them discover the love of Christ.

Within six months, Jeni could both read and write. Jeni's children happily watched their mother's progress and celebrated her ability to do simple things that had troubled her before.

"I am very happy that my mother is able to read and write now by the help of women missionaries," Jeni's daughter shared. "These days, she is able to negotiate with the shopkeepers and writes her signature."

Jeni's excitement over her new skill soars, and she thanks God for ending the struggle that troubled her for decades.

"Today," Jeni declares, "I am proud to say I am not illiterate."

Jeni's new skills enable her to perform daily life activities that were impossible before attending the literacy classes, and she is now equipped to learn more about the Great Physician who healed her and gave her new life.

You can help other women discover hope and freedom from illiteracy by donating toward GFA World-supported Women's Literacy today.