The Andaman and Nicobar Islands consist of 572 islands formed by a submerged mountain range off the eastern coast of India. Only 36 of the islands are inhabited.

People of varying faiths, languages and backgrounds live in harmony on the islands today, but it wasn’t always a peaceful place. It was designated as a penal colony in 1858 after the British abandoned attempts to develop settlements among the indigenous tribes on the islands. Indian activists and freedom fighters were then exiled to the islands as punishment for rebelling against British rule. Hundreds spent their days in solitary confinement in the infamous Cellular Jail, where they were tortured and eventually executed.

Japanese troops gained control of the islands during World War II but surrendered in 1945 to the South East Asia Command, who then began rehabilitation for the remaining prisoners. The Andamans and Nicobars were incorporated into the Indian Union in 1947.

Today, descendants of those early prisoners along with the indigenous people inhabit the land with a mix of immigrants from Bangladesh, Myanmar and Sri Lanka. This diverse population has led to many marriages between people of different religions and cultural backgrounds.

There are also five indigenous tribal groups on the island. Little is known about their customs or lifestyle because, by law, any form of contact with them is strictly prohibited in order to preserve their heritage. Their numbers are slowly dwindling; only about 400 tribals remain on the islands.

The Andaman and Nicobar Islands are covered with forests, which provide the people with a large variety of wood to be exported, such as sawn timber, commercial plywood, match splints and veneers.

Rice is the main cash crop for the Andaman Islands, while coconut and areca nuts are the main cash crops of the Nicobar Islands. Other fruits are grown on the islands as well, such as mangoes, oranges, bananas, papayas and pineapples.

The islands have a tropical climate with medium to heavy rainfall from May to mid-September and then again in November and December. The islands lie near a major fault line and have been struck several times by earthquakes, including the tremor that caused the catastrophic Asian Tsunami in 2004. 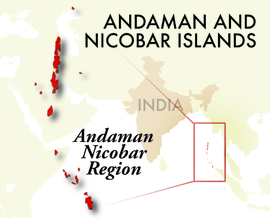