"State of the Andhras"

Andhra Pradesh, which means “State of the Andhras,” is named after the ancient tribe that migrated to the area 3,000 years ago. But modern A.P. is made up of hundreds of people groups. Most speak Telugu, while others speak Tamil, Kannada, Marathi, Oriya, Urdu or Hindi.

Geographically, Andhra Pradesh lies on the Bay of Bengal, with terrain ranging from fertile plains to mountains to arid plateaus. The state’s 374 miles of coastline boast an active fishing industry, and its fertile plains yield an abundance of crops, including rice, cotton, sugarcane, bananas and chili peppers.

Although some Christians live in the state, most reside in the coastal areas or urban centers. More than 400 people groups in Andhra Pradesh are classified as unreached, having little access to the Good News. 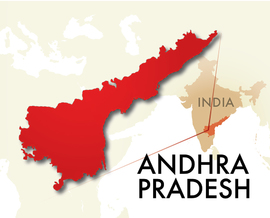