"Land of the Dawn-lit Mountains"

Nestled in the dense forests of the Himalaya Mountains, Arunachal Pradesh is the largest state in eastern India. Because of the high peaks and low valleys, the climate in Arunachal Pradesh varies greatly depending on the elevation.

Remote villages scattered throughout the hillside possess strong cultural autonomy, each having its own language, style of dress and customs. The people enjoy bold colors, wearing dramatic feather plumes in their hats and rustic jewelry made from bones, shells and horns.

Tropical rainforests are found in the eastern part of the state, near its border with Myanmar, while alpine forests cover the northern region. There is also an abundance of bamboo and other greenery, making the mountains lush and fertile.

Many of the people work in agriculture, planting crops like rice, corn, millet, wheat, sugarcane and ginger. Arunachal Pradesh also has an ideal climate for fruit orchards. 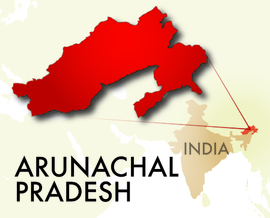