"The Land of Tea"

The far northeastern state of Assam is one of the most beautiful—and dangerous—states in India. It is beautiful because of its lush vegetation, fed by some of the world’s highest rainfall totals—from 70 to 120 inches a year—and its sprawling tea plantations that produce 55 percent of India’s tea and some 15 percent of the world’s supply.

But it is also dangerous for those who live there—because of a rebel insurgency and tribal warfare. Wild animals,including herds of elephants, also pose a threat.

A Blessing and a Problem

In Assam, life is dominated by the Brahmaputra River, whose annual floods bring both destruction to homes and soil-enriching sediment that feeds the state’s lush tea crops. 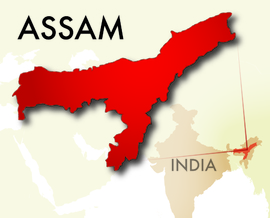