Located in North India, Bihar is one of India’s poorest states and the most illiterate. Rice, wheat, sugarcane and potatoes are some of the crops raised in this largely agricultural land. Silk and leather are also produced there.

Bihar has fertile land, watered by a rich network of rivers. Yet annual flooding from two major rivers, the Ganges and the Kosi, wreaks havoc on the crops. These rivers also figure prominently into people’s religious beliefs. Biharis join the millions of devotees each year who take a bath in the Ganges River, believing it will wash away their sins.

The Kosi River, another revered location, is also known as “The Sorrow of Bihar” for the destruction and deaths caused by its annual flooding.

Many earnest seekers travel long distances on pilgrimages to destinations they hold as sacred in Bihar, which is also the birthplace of Buddhism and Jainism. Thousands flock to the famous Mahabodhi temple, which stands near the spot where, according to Buddhist tradition, Buddha received enlightenment under a large fig tree.

Bihar is home to many tribal groups. One tribe, the Santals, has oral traditions resembling the biblical accounts of creation, man’s fall and the flood. The people in this densely populated tribe tend to live in or near forests. 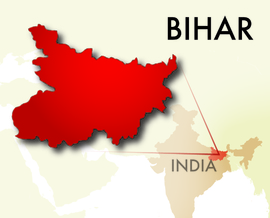