"Home of the Tribals"

The Indian state of Chhattisgarh is known as the “Home of the Tribals” because the majority of its people belong to indigenous tribal groups. Their culture is rich in dance and ritual, and the local diet, mainly based on rice and pork, also features such delicacies as ants, squirrels and rats.

Chhattisgarh, which formed about one-third of Madhya Pradesh before the two were separated in 2000, is also known as “the green state” because forests cover more than 45 percent of its land. Forest products, including bamboo, provide both income and resources for local use. Much of the remaining land is rocky, leaving little room for agriculture. But it is rich in mineral resources, including copper, coal, iron, manganese and, more recently, diamonds!

One of the world’s largest tribal populations lives in the forests of Chhattisgarh, where they follow a religion that blends animism and witchcraft with the worship of multiple gods.

Many of the tribals cannot read or write and are open to literacy-training programs. 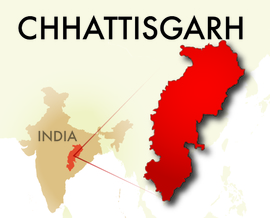