"A Wonder from Medieval to Modern"

From ancient castles to modern business buildings, Delhi represents past and present, wealth and poverty. This melting pot of widely varying faiths and countless cultures gives Delhi a soul that is unique in all of India.

Built to house 70,000 people, Delhi has long exceeded its capacity with an urban population above 8 million. The greater Delhi area has a population of 18 million. Here, the rich and poor live side by side. People from across India migrate to the capital city looking for a new life. But those who can’t find the job they’re hoping for will most likely end up in one of the slums. Some 4 million men, women and children call these slums home.

Delhi has been India’s capital since it was chosen during British rule in 1931. But its influence goes back centuries. A splendid palace was the beginning of one of the area’s earliest capital cities around 1450 B.C.

Today, ancient castles and towers are sprinkled across the vast area that is now part of Delhi. Businesses, streets, shops and slums are built around the historical landmarks in this culturally rich, vibrant and influential city. 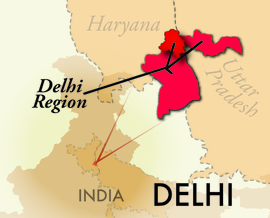