"Rome of the East"

Goa is India’s smallest state and one of the most popular tourist destinations in the country with its year-round tropical weather and beautiful coastline neighboring the Arabian Sea.

Tourism is a major industry in the state, attracting more than one million travelers each year. Fishing is also an important means of livelihood for the people of Goa.

Goa retained a heavy Portuguese influence after being under Portugal’s rule for more than 400 years. And even today, that presence is still visible in the architecture, lifestyle and the amount of Anglo-Indians who have mixed Portuguese and Indian ancestries.

The Portuguese also brought the Roman Catholic faith with them. Many Goans profess Catholicism, but due to the increasing number of people who practice Hinduism, its beliefs and customs have interlaced with Christianity. Goans are known to be warm, friendly, laid-back people who adopted the lifestyle they term susegad, which means to relax and enjoy life to the fullest.

Even with all the state’s beauty and European charm, drug trafficking and prostitution are common in Goa. 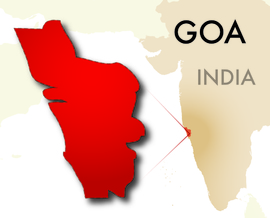