"The Soul of India"

Gujarat is most famous for being the birthplace of Mahatma Gandhi. This state’s most famous son became world-famous for his non-violent battle for Indian independence.

By the time Gandhi came on the scene, Gujarat already had 4,000 years of history under its belt. It all started with the Indus Valley civilization. In the course of time, Gujarat also faced a Greek incursion, 400 years of Muslim rule, European influences from Portuguese, Dutch and English explorers, invasions from neighboring states and British rule before it became part of independent India.

The result of this rich, ancient history is a modern state boasting 631 distinct people groups creating a vibrant mosaic of cultures, flavours and dress. Gujarat is India’s melting-pot attracting individuals from across India and around the world.

Thanks to its colorful history, Gujarat contains many fascinating archaeological treasures, including city ruins and important historical sites, such as Mahatma Gandhi’s birthplace.

But it’s not all about history. Gujarat is an important part of India’s economy as the country’s leading producer of cotton and peanuts. Much of India’s milk is also produced in Gujarat. The state also has a vibrant manufacturing industry that makes many types of chemicals, pharmaceuticals and dyes. 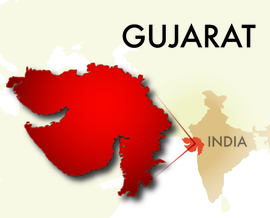