"The Milk Pail of India"

The people of Haryana, a small state wedged between India’s capital of Delhi and four other North India states, enjoy one of the highest standards of living in the country, fueled by its productive agriculture.

Tourism also provides a major economic boost, with 44 purpose-built tourist complexes dotting the landscape that draw crowds throughout the year to their refreshing lakes.

Haryana achieved statehood in 1966. Prior to that it was part of Punjab state. Today Haryana and Punjab share a fertile plain, where immense quantities of grain and milk are produced.

This bond is also reflected in the large presence of Sikhs in Haryana. As in their Punjab homeland, the traditionally tall Sikhs are easily identified by their distinctive turbans and beards. Historically a warrior class, today they excel in sports and are known for their kindness and generosity.

Also known as the “Land of Plentiful Grains” and “Land of Immense Riches,” Haryana was the first state in India to bring electricity to every village. 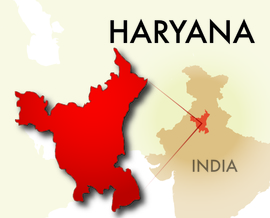