Jammu & Kashmir is a land of breathtaking splendor filled with mountain peaks, lush valleys, forests and lakes. The majestic Himalaya Mountains run through this state, which forms the northern tip of India. It is the only state in India with two capital cities—Srinagar (summer) and Jammu (winter).

The Vale of Kashmir, a famous valley surrounded by high mountains, has been called “Paradise on Earth.” But the Kashmir region has suffered deeply, as it is at the heart of decades of land disputes between India and Pakistan. The region is also affected by terrorist activity that spills over from neighboring Afghanistan and Pakistan.

The majority of people in Jammu & Kashmir work in agriculture. They grow corn, rice, saffron, peaches, cherries, plums and pomegranates. Much of the harvest is exported. There is also a thriving textile export industry, which supplies shawls and rugs to the rest of the world.

Jammu & Kashmir is India’s only state with a Muslim majority. In the north, Kashmir has a strong Islamic presence dating back to the 14th century. Known as “Little Tibet,” Ladakh in the northeast has a mountainous landscape similar to Tibet and a long heritage of Buddhism. The state’s Hindu population is primarily clustered in the Jammu region. 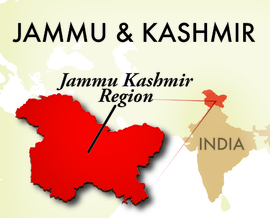