Jharkhand, whose name comes from the Sanskrit word for dense forests, is one of the newest states in India. It was formed out of the southern half of Bihar in 2000. It is also one of the least-developed states in the country, in spite of its great mineral wealth. Jharkhand is home to India’s largest iron and steel mills.

Gautama Buddha, the founder of Buddhism, lived and taught in what is now Jharkhand some 2,500 years ago.

Jharkhand is in India’s “tribal belt,” and about one-third of the state’s inhabitants are members of an indigenous people group. Only 20 percent of the population lives in urban areas.

One significant people group, the Santal, is the largest indigenous tribe in India. They have preserved their distinctive culture, including animistic worship practices and the tradition of telling stories that closely mirror biblical accounts. Their language is also unique in that it does not share linguistic roots with other Indian languages. 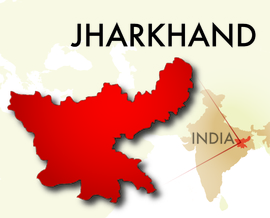