In the state of Karnataka, whose name means “the lofty land,” the geography ranges from sea level on the coast to more than 6,000 feet in the Mullayanagiri Hills.

IT, Aerospace and Biotech

The real “high” in Karnataka, however, is not its geography but the economy, which has been the fastest growing in India over the past decade. Bangalore, the capital city, is known as India’s “Silicon Valley,” with a burgeoning IT industry that reaches around the world.

In addition to computer-related companies, including international call centers, Karnataka is also home to some of the country’s largest aerospace firms and scientific research facilities, including 158 biotechnology companies.

Reflecting this leap into the hi-tech age, Karnataka boasts a relatively high literacy rate for India (67 percent), lower unemployment than the national average, and large numbers of people with good incomes.

However, more than half of the state’s population is still engaged in agriculture, and the economic boom has not reached into many of the villages.

Bordering the Arabian Sea on India’s western coastline, Karnataka was formed as a state in 1956 and was known as Mysore until 1973, taking its name from the former kingdom and later the princely state of the same name during British rule.

Today, Karnataka is made up not only of tribals and rural farmers, but also some of India’s most educated and upwardly mobile young professionals. 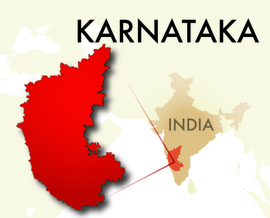