Kerala, one of the smallest states in India, is only 360 miles long and from 20 to 75 miles wide on India’s famous Malabar Coast.

This is a vacationer’s tropical paradise—a land of beaches, inland waterways, lush coconut groves in the south and tree-covered hills in the north. Major plantations produce tea, coffee, rubber and various spices. Other cash crops include cashews, bananas, rice, pepper, sugarcane and vegetables.

This tiny state in southwest India has the highest literacy rate in the nation and one of the most educated populations on the Indian Subcontinent. It is also one of the healthiest, with the longest life expectancy and lowest infant mortality rate in India.

Although Hinduism is the most widespread religion, Christianity in the state dates back to the first century, when the Apostle Thomas came and established seven churches there. 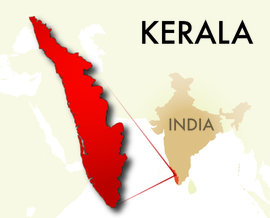