"The Heart of India"

Madhya Pradesh, a large state in the geographic center of India, has a rich history. It became a state of modern India in 1956. Prior to that, it was ruled by competing tribes from the 1500s through the early 1800s.

Most of Madhya Pradesh is a plateau surrounded by two mountain ranges. Valuable trees—teak, ebony and rosewood—grow in its lush forests, which are also home to the largest tribal population in the world.

Travel in the dense forests is difficult, and the cultures of the varied tribes are challenging for visitors.

Adequate rainfall and good soil contribute to a prosperous agricultural economy that employs more than 70 percent of the population. Grains, especially wheat, are the main crops. But despite the output of the land, more than a third of the state’s people live in poverty. 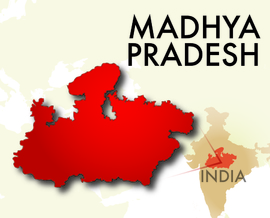