Maharashtra is the third-largest state in India. Its name literally means “The Great State,” and that is how the people see it.

The massive seaport city of Mumbai, formerly called Bombay, is the economic powerhouse that drives much of India’s financial industry. With a population of some 15 million, it is the largest city in India and the second largest in the world. It is also a media center, and its “Bollywood” film studios extend its cultural impact around the world.

Mumbai is also home to the world’s largest slums, with as many as 5 million people living in shanties with no running water. Street children, displaced families and prostitutes abound in the slums.

Also in Maharashtra is the city of Nagpur, located at the geographical centre of the nation. It is a hub for transporting both people and goods across India.

Despite it being India’s most industrialized state, close to 70 percent of Maharashtra’s people depend on agriculture for their livelihood. There are also millions of tribals living in the state’s tribal belt.

The major people group in the state are the Marathis, and the official language is Marathi. English, Urdu, Hindi, Gujarati, Khandeshi, Telugu and Kannada—in addition to multiple tribal languages—are also spoken by significant numbers of people. 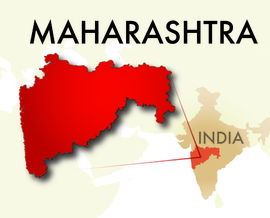