"The Jewel of India"

Manipur is one of the seven sisters of northeast India, along with Assam, Tripura, Mizoram, Nagaland, Arunachal Pradesh and Meghalaya. More than 2.7 million people inhabit this beautiful state encircled by nine hill ranges rich in jungle terrain. Manipur has an assortment of fauna and flora that flourish upon forest-covered hills and in valleys and plains. A wide variety of medicinal plants grow wild in these hills and plains.

The capital city, Imphal, lies in an oval-shaped valley surrounded by mountains that help protect it from cold winds and cyclonic storms.

The Meitei group dominates Manipur’s culture. Part of the high caste, they mostly follow their traditional, ancestral religion and are unwilling to associate with Christians because they view Christianity as a faith only for the poor, tribal people.

Animism—the belief that spirits inhabit nature and inanimate objects—was the original religion of the state for many centuries. After World War I, Christianity increased as many tribals turned to Christ.

The people of Manipur are an enthusiastic group who enjoy festivals and love to sing, dance and play games.

The Meitei people are credited with inventing the game of polo. The women enjoy hand-looming, which is the largest state industry, and take pride in their beautifully handcrafted clothes and ceremonial dresses.

Despite Manipur being known as “the Jewel of India,” decades of civil violence have marred the state. More than a dozen rebel groups—each devoted to a separate cause—are active in Manipur. 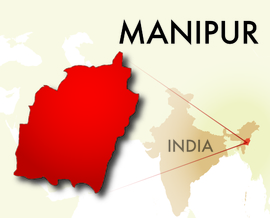