"Land of the Highlanders"

Mizoram, a very mountainous state in far northeast India, shares borders with Myanmar and Bangladesh. It is a land of steep river valleys and more than 20 mountain ranges, some with peaks topping 6,000 feet.

Although most of the people live in the thousands of mountain and forest villages, the capital city of Aizawl is home to more than 250,000. There are also five other towns with populations of 20,000 to 50,000.

Mizo is the official state language, but English is the one primarily spoken.

The Way of the People

Mizoram’s population includes the Mizo and Chakma people, along with dozens of other tribal groups, each with their own customs, colorful clothing, rituals and distinctive music.

Music is a hallmark of the mountain tribes. The people sing beautiful hymns, and their harmonious voices are known around the world.

Religion in the Land

The predominant Mizo tribe, whose name means “highlander,” became Christians after 19th-century Presbyterian and Baptist missionaries preached the Gospel to them. The Mizos also claim to be of Jewish descent. The minority Chakma people, on the other hand, are Buddhists. 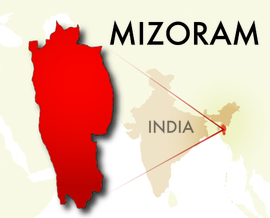