"The Land of Hills"

Scattered across the mountainous terrain of Nagaland are many tightly knit tribal villages populated by people who are loyal to their heritage. Each tribe has its own unique style of dress, language, customs and governmental system. The Nagas are the largest of these tribes.

Nagaland’s many rural villages follow a government system based on the ancient Greek model recognizing that each village is unique and needs to be self-governing. This form of government has empowered the rural areas and resulted in tremendous growth and progress. In many rural villages, the children are educated in gender-specific groups. The boys live and go to school in a building called a morung. The villages also set aside similar buildings for girls to receive their education.

The Nagas are adept at using whatever resources they have. That’s why their diet includes delicacies such as wild birds, spiders and grubs.

There are few large cities in this state, with Dimapur—the only city connected to the rest of India by both rail and an airport—being the hub of industrial commerce. Many shops, restaurants and businesses are found throughout the metropolitan area.

Those who live outside of the city in rural villages across Nagaland work with their hands, producing crops like rice, corn and millet on terraces cut from the hillsides. They prize the farmland they own, passing it down from generation to generation.

Christianity was introduced in Nagaland in the 1880s, and many chose to follow Christ. There were three significant spiritual revivals in the 20th century. As a result, thousands of Naga people went out to serve as missionaries in other parts of India and the world. 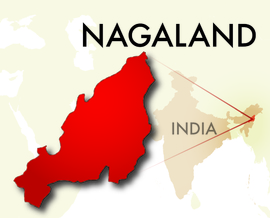