Turbulent and unique, Odisha has plenty of danger as well as new opportunity.

The martyrdom of missionary Graham Staines and his two sons in Odisha shocked the world in 1999. However, martyrdom is not uncommon in Odisha, which has perhaps the highest incidence of persecution against Christians in all of India.

With their state full of temples that draw devotees and pilgrims, Odisha’s people are highly religious. More than 60 tribes—each with a different culture, language and religious practice—live in Odisha, which is part of the tribal belt that spans North India. The people have their own recognized style of weaving and wearing the traditional Indian dress, the sari.

Odisha is where Mahatma Gandhi is said to have taken a vow of poverty, and much of India’s nationalist movement took root here. Several revolts were recorded in Odisha during India’s struggle for independence.

The state is full of ancient historical cultural monuments that draw tourists.

Rivers run throughout Odisha, making the land fertile yet susceptible to yearly flooding and devastation. In spite of its good farm land and abundance of natural resources, Odisha remains one of India’s poorest states. 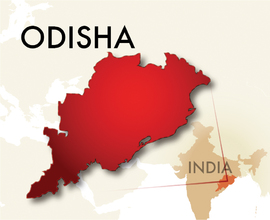