"Land of the Sikhs"

Because of its low poverty rate, Punjab, India, is thought to have the highest quality of life in the country. Punjab’s people love to sing, dance and celebrate.

Carving Out a State

Modern-day Punjab was created in 1947 when the state was split to accommodate the creation of the Muslim country of Pakistan. The remainder of Punjab became part of India.

More political adjustments in the 1960s resulted in the further division of Punjab to create two more states and one territory. The result is that Punjab shares its capital city, Chandigarh, with neighboring state, Haryana.

Punjab and Haryana also share a fertile plain, where immense quantities of grain and milk are produced. Punjab’s plains are irrigated by two major rivers and an extensive canal system.

Punjab is perhaps most famous for the presence of Sikhs, the traditionally tall men easily identified by their distinctive turbans and beards. Their Golden Temple at Amritsar is both a place of Sikh pilgrimage and a world-famous tourist site. Amritsar also bears historical significance as the place where massive killings took place during India’s struggle for independence.

Historically a warrior class, today the Sikhs excel in sports, and many Indian Olympic athletes are Sikhs. They are known for their kindness and generosity. 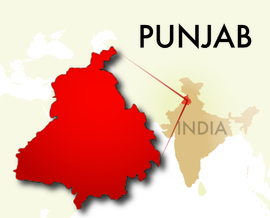