"The Land of Kings"

Rajasthan lives up to its name, literally meaning “the abode of Rajas (kings).” With grand castles, sparkling lakes and sweeping dunes, this state has the romantic sense of mystery and adventure that many people envision when thinking about India.

The state is also a treasure trove of Indian history, with many battle-scarred forts and breathtakingly beautiful palaces that were once homes of the kings. The Rajputs—descendants of the early rulers of the state—are the largest people group in the state. Many tribal groups, each with its own social system and customs, also call Rajasthan home.

A Land of Contrast

Rajasthan is at India’s border with Pakistan. It is a land of geographic contrast, containing both a desert and a mountain range. This unusual mixture means that some of the state has lush forests, while other areas are arid and dry.

Most of the people in Rajasthan are farmers, but there are some who work in the manufacturing industries. Many residents are also employed creating world-famous handcrafts of brass, marble, pottery and jewelry. 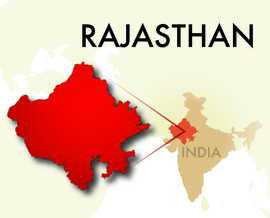