"Garden of Eden of India"

The majestic mountain ranges and the grandeur of the Himalayas make up the backdrop of everyday life in Sikkim, India. This North Indian state borders the country of Nepal and shares much of that country’s culture.

Mount Khangchendzonga, the third-highest mountain in the world, is the crowning glory of Sikkim. It’s also revered and worshiped as the state’s guardian deity.

The earliest inhabitants of Sikkim, the Lepchas, have a deep connection with nature and worship the spirits they believe inhabit mountains, rivers and forests.

Nepali immigrants, who now make up the majority of the population, came to Sikkim in the 19th century, bringing Hinduism to the region. But a strong Buddhist influence was prevalent long before that and is still evident around the state.

Sikkim is the least populated state in India. A botanist’s paradise, it has more than 4,000 species of plants.

Agriculture and cultivation can be difficult in the mountain ranges, but in the plains and valleys, the Sikkimese grow rice, corn, millet, wheat, barley and oranges. 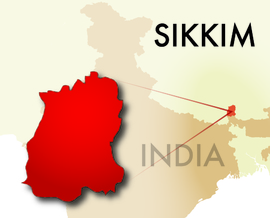