Situated in the southern part of India, Tamil Nadu is a coastal state bordered by the waters of the Bay of Bengal, the Indian Ocean and the Arabian Sea. Cascading waterfalls, hills and rivers are found throughout the state.

The caste system is prevalent here, and it is home to many Dalits (“Untouchables”), who suffer deeply for their low societal status.

Many in Tamil Nadu are part of the Dravidian line—India’s original inhabitants. Although most of India’s languages trace their origins back to Sanskrit, the Tamil language was formed from a separate source. Tamils are very proud of their unique language.

Temples dot the state and are visited by many pilgrims and worshipers. People are generally very devout in their traditional religious practices.

The Apostle Thomas was the first Christian missionary to this state. 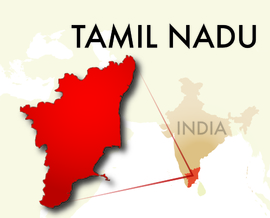