Telangana, India’s 29th and newest state, is populated by the Telugu people. This state covers 44,000 square miles of hot, dry land and forms the link between northern and southern India.

Muslim rulers governed Telangana from the 14th century until 1948. In 1956, although some pled for Telangana to be a separate state, Telangana became part of Andhra Pradesh, a South Indian state. On June 2, 2014, after decades of protests, Telangana’s people gained their dream of statehood.

In the heart of Telangana sits the bustling capital city of Hyderabad, a high-tech center of around 7 million people. With a large Muslim minority, Hyderabad is home to one of the biggest mosques in India.

While the capital is a technology hub, much of Telangana depends on agriculture. Irrigated by the Godavari and Krishna Rivers, Telangana produces significant amounts of rice, cotton, sorghum, maize and other crops. Telangana cuisine can be distinguished by its incredibly spicy curries, full of chili peppers and tamarind, and its rotis (flatbreads) made from millets grown in the region.

Most inhabitants of Telangana 10,000-plus villages and 15 cities speak Telugu, but the vast majority of the Muslim population speaks Urdu, and others in the state speak Hindi. 66 percent of people in Telangana are literate. 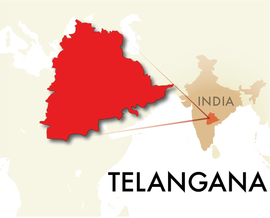