Tripura is one of the “Seven Sisters” states of far northeast India. An independent kingdom for some 3,000 years, Tripura became a state in 1972.

The people of Tripura express their rich cultural heritage through their art, music and folk dancing. In rural areas, tribal customs—such as leaving parasols on ponds in memory of the dead—are still observed.

Like most of Northeast India, Tripura is comprised of thousands of tribal villages scattered across dense jungles. It is also home to a number of insurgent groups.

Surrounded on three sides by the country of Bangladesh, Tripura now has more Bengali immigrants than native Tripurans living within its borders. This has led to a number of rebel groups being formed to drive them out.

Tripura is the second- smallest state in India, and about 65 percent of the people are engaged in agriculture. They grow pineapples, oranges, coconuts and rice.

The land is mostly hilly terrain and forest, with lowlands containing swamps and thick jungles. Temperatures range from 50 to 95 degrees Fahrenheit, and 82 inches of annual rainfall irrigate the crops and forests. 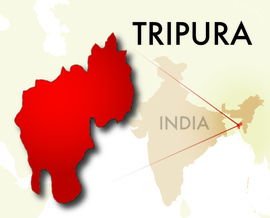