"The Land of the Gods"

Uttarakhand (formerly known as Uttaranchal) became India’s 27th state in the year 2000. In January 2007, the state officially changed its name to Uttarakhand.

Sweeping mountains covered in lush forests are dotted with ornate shrines and temples for traditional religions. Many of the people are extremely devout followers of local gods and goddesses.

Since the source of the famous Ganges River is in Uttarakhand, pilgrims from all over India—and the world—come to see what is considered India’s most sacred site. As a result, the riverbanks of the Ganges are extremely crowded, especially during religious festivals.

Catering to the tourists who come to take a holy bath in the Ganges River is by far the largest industry in the state. The people in Uttarakhand also run dairy farms and raise sheep for their wool. Others grow spices or work in hydroelectric power plants.

Uttarakhand’s borders with the countries of Nepal and Tibet make it a politically strategic state.

Tucked away throughout the mountains are numerous tribal villages. With their own distinct histories, cultures and customs, these tight-knit communities are the fabric of Uttarakhand. 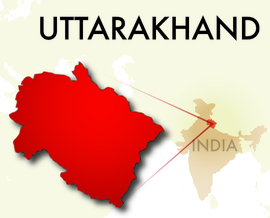