"Pearl of the Orient"

The teardrop-shaped island of Sri Lanka is located in the Bay of Bengal, off the southeast coast of India.

Forest-covered mountains, plains just barely above sea level and sandy beaches and lagoons make the island a popular tourist destination. Sri Lanka is world-famous for its tea, and it also exports coconuts, rubber and cinnamon.

Beyond the natural beauty, however, lies a land striving to heal after years of internal strife.

The two major people groups on the island—the Sinhalese and the Tamils—fought a bloody civil war that lasted 26 years and claimed more than 60,000 lives. The battle began in 1983 with a dream of having a separate Tamil state. Peace efforts were futile, as neither side relinquished their cause. The bloodshed and violence finally came to an end in 2009, but many Sri Lankans are left with physical and emotional scars.

Adding to the nation’s distress, a massive tsunami ravaged a large portion of Sri Lanka in 2004. The tsunami left many families homeless and thousands of children orphaned. 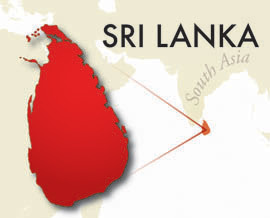