The Central Sri Lanka Region is nicknamed the “Tea Basket” because of the abundant tea estates it contains. The plantations provide a portion of the island’s income. Rice farming and rubber production also are important to the local economy.

An elephant sanctuary created to take in orphaned baby elephants found in the jungles of Sri Lanka is a major tourist attraction in the region.

The city of Kandy in the Central Sri Lanka Region was once the state’s capital city. In ancient times, long before it became part of Sri Lanka, this area was ruled by Indian kings. Today it is famous for the most sacred Buddhist establishment—the Temple of Tooth, where one of Buddha’s teeth is preserved. 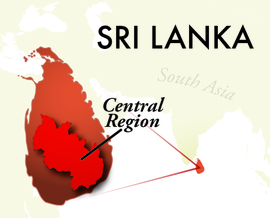