The Central Nepal Region is home to the Kathmandu valley, a bowl-shaped area surrounded by mountains. Kathmandu, Nepal’s bustling capital city, is in this region.

Kathmandu has one of the most diverse populations in the country, with various people groups making their abode here.

Although the majority of the people in the Central Nepal Region practice Hinduism, there are also many Buddhists, Muslims and even a small population of Christians. 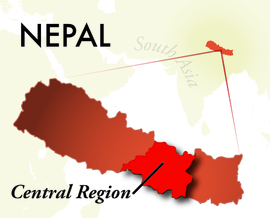