The Dhaka Bangladesh Region is in the north of the country, with the Ganges River forming its southern boundary. Assam is to the north, West Bengal is to the west and the Chittagong Region is to its east.

The region is home to Dhaka, the nation’s capital city. It is the largest Muslim metropolitan area in the world and is projected to top 25 million people by 2025. Dhaka is also known as “rickshaw city” because it is home to some 400,000 rickshaws. Foreign investment is fueling an improved transportation and business infrastructure. However, a growth rate approaching five percent per year has resulted in a city with slums amid high-rise offices and shopping malls. 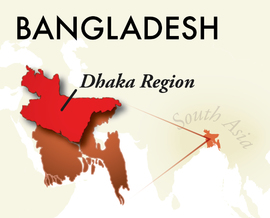