"Land of Beauty and Hope"

The tiny country of Bangladesh is the home of Bengal tigers, beautiful beaches and a lush, green landscape. It is also a land of brutal poverty, corruption and wave after wave of unrelenting natural disasters.

Once among the wealthiest areas of the Indian Subcontinent, Bangladesh is now one of the poorest. More than a third of its people live below the poverty line. The average life expectancy is only 67 years.

Bangladesh has a young population, with more than half of its people under age 15. Known as East Bengal during the days of British-ruled India, today’s Bangladesh was part of the Muslim-majority nation of Pakistan when the Subcontinent was divided in 1947.

Except for the Chittagong Hills in the southeast, Bangladesh is largely a low-lying delta. Annual flooding brings massive destruction to villages, but it also enriches the land with fertile soil.

As a result, Bangladesh is rich in rice production as well as growing jute, fruit and produce. Thirty percent of its workforce labors in industries such as textiles and coal mining. 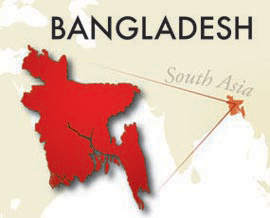