The Khagrachari Region encompasses the eastern districts of Bangladesh, which border Myanmar (Burma) and Tripura, India. The region includes the bustling port city of Chittagong, the maritime gateway to the nation, and the famous Cox’s Bazaar, which has the longest sandy beach in the world. Also in the region are the Chittagong Hills, home to various tribal groups as well as to elephants, leopards and other exotic animals. The hills are among the world’s wettest areas, receiving some 200 inches of rain per year. The Khagrachari Region’s residents live in some 11,000 villages and 10 towns and cities. About 80 percent are Muslim. 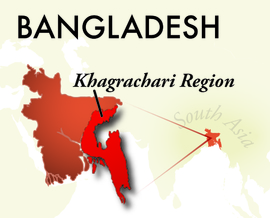