The Western Nepal Region is the country’s most remote and poorest area. Access to health care, education, roads, water and electricity is very limited. More than 40 percent of the population lives below the poverty line.

The rustic Rukum district, sometimes called “the place of 52 lakes and 53 hills,” has many beautiful attractions that seem virtually uncharted by tourists because of lack of information about them.

Although the Western Nepal Region is predominantly Hindu, Tibetan Buddhists make up a small but influential minority. 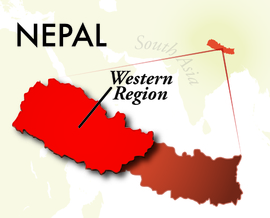