Many different people live in the bustling Bareli Region, which is filled with a variety of cultures, customs and languages. Although Hindi, Urdu and other national languages are common, the youth in the region are often fluent in English as well.

Located in the northwest part of Uttar Pradesh, the Bareli Region is a fast-growing center of commerce with large bamboo furniture factories and agricultural trade markets. Most of the populace works in these industries, harvesting bamboo or producing cotton, grain and sugar.

Seven rivers run through the region, surrounded by large, low-lying plains. These fields provide fertile soil for farming, but they are also prone to flooding due to their locations. In times of heavy rainfall, the economy can be greatly impacted because of lost crops. 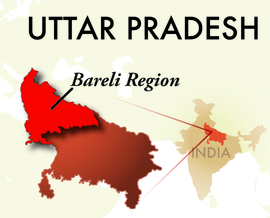