Named for its location between the Varuna and Assi Rivers, the Varanasi Region is one of the most holy destinations for many who follow traditional religions.

The famous Ganges River also winds though the region. Pilgrims from all over India and the world come to see what is considered India’s most sacred site. This area is usually extremely crowded, especially during religious festivals.

Although there are several rivers in the Varanasi Region, water shortage is a real threat due to polluted sources and low rainfall. 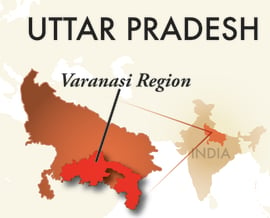