Although it was once a developing center of culture, the Bardhaman West Bengal Region today is heavily tribal. Many make their living in agriculture, growing crops in fertile land near a branch of the Ganges River, which is considered holy. The region produces so much rice that it is known as the granary of West Bengal.

The area is also rich in minerals, and tribals in this region are well known as expert jewelry artisans. The tikli is their most-prized ornament. It is encrusted with gems and pearls and worn on a bride’s forehead. Other elaborate forms of jewelry made from gold, silver and conch shells are specialties of these craftsmen. 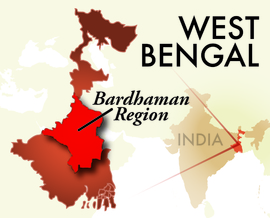