Nicknamed “Queen of the Hills,” the Darjeeling Region became part of India during British rule. British forces had their eye on Darjeeling because of its strategic military location and potential for valuable tea production.

The Darjeeling Region was largely uninhabited until the British began bringing in workers from Nepal to build tea plantations. It soon became a thriving source of the country’s best and most famous tea.

Today, the Nepali laborers still make up the largest people group in the region. Refugees from Bangladesh and Tibet also call the Darjeeling Region home. Numerous conflicts have occurred due to these various ethnic backgrounds.

The largely Nepali population has sought autonomy, and now the region is more powerful and independent than the other areas of West Bengal.

The Darjeeling Region was developed with tea plantations in mind. Today, there is still inadequate infrastructure for the rural villages, and villagers have to walk hours to sell their vegetables at a market. In the rainy season, dangerous landslides may block their access to the towns, contaminate their sources of water and even destroy their homes. 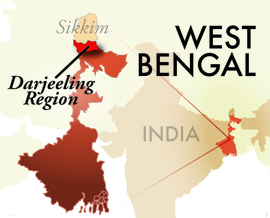