The two main people groups in the Kharagpur West Bengal Region’s 5,000 villages are the Bengalis, known as patrons of classical culture, and the Santals, India’s most primitive tribal group. The Santals are a closed community who prefer living near forests. They provide for their families by fishing and hunting with bows and arrows.

Most of the people in the Kharagpur Region are farmers, but business and industry also thrive here. The silk saris produced in this region, traditionally worn by Indian women, are in high demand.

The southern portion of the Kharagpur Region touches the Bay of Bengal, and marine biologists carry out scientific research along the beaches. Further inland, forests are home to wildlife such as bears, wild pigs, elephants and panthers.

This region is also known for political revolution. Unrest, violence and an intense fear of terrorism make it difficult to move around freely without stirring up suspicions of being underground revolutionaries. 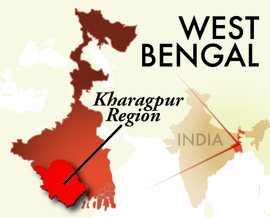